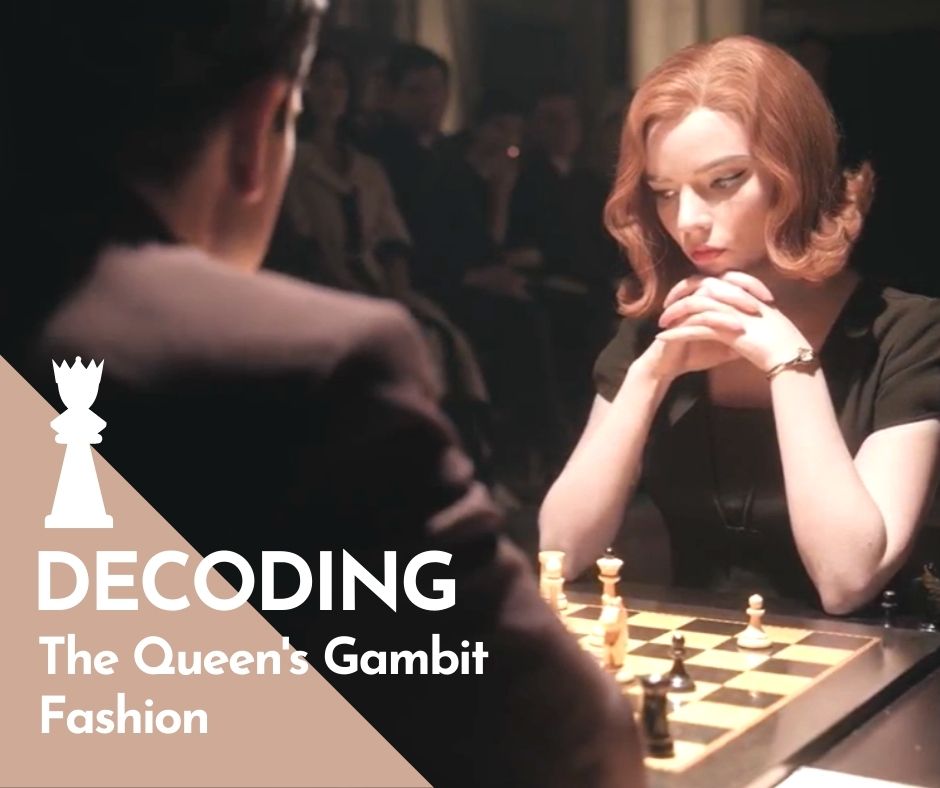 Hi Guys, I just finished Binge-watching The Queen’s gambit (And I loved it!). While this popular tv show is about a genius female chess player, fashion is a real component of the story.

As the movie geek I am, I did intensive research about the show and the costumes after watching it. Hence, I thought it would be interesting to share it with you and start a new article series “decoding fashion”.

What is The Queen’s Gambit?

The Queen’s Gambit is a popular coming of age drama that takes place into the mid-1950’s and continues in the 1960s. It was released by Netflix on October 23rd, 2020 and quickly became a big hit. After 4 weeks only, The Queen’s Gambit became one of the most watched scripted mini-series on Netflix.

The story is based on a book written by Walter Tevis in 1983 and is, contrary to what some people might think, not a true story. It’s completely fictional.

The Queen’s Gambit is about the life of Beth Harmon’s, an orphan chess prodigy and her path to the top, along with her struggles with alcohol and drug addiction. Not only is the show amazing, as it succeeds turning chess tournaments into crazy interesting battles to watch, but the costumes in the show are also very stylish and full of meanings.

Who designed the clothes for the Queen’s Gambit?

Gabriele Binder is the costume designer behind Beth Harmon’s iconic outfits. This German designer worked on multiple movies and tv shows such as The Passion of Darkly noon, La vie des autres, In the land of blood and honey or Ostwind: Aris Ankunft.

Before diving into the subject and so that we understand the context a little better, let’s first talk about fashion in the chess world.

Are there any clothing rules for chess players?

There aren’t any particular, well-defined dress codes for chess players. However, FIDE does give some recommendations for formal events and competitions.

In general, Chess players are allowed to wear whatever they will feel comfortable in but are required to keep a neat and clean appearance to give a good image of the chess world.

This being said, FIDE does give a (non-exhaustive) list of recommended clothes players can wear.

As for female chess players, recommended outfits would be :

These items, however, are not well perceived during competitions and players may be requested to change outfits :

In addition to that, during tournaments and championships, the local organizers can include a specific rule in terms of clothing, like wearing a suit or a jacket.

Moreover, chess players may be asked to abide by the cultural rules and the etiquette of the country they are playing in. For instance, the Women’s World Championship in Iran is requiring female chess players to wear a hijab.

Grandmaster is a title given by FIDE to the top chess players of the world. This is the greatest award that a chess player can receive.

So far, FIDE has awarded more than 1900+ grandmaster titles.

Most grandmasters will wear suits during their tournaments. First reason is to give a more professional vibe. If the grandmaster is endorsed by a company, the sponsor might want the player to give a good image in case of media coverage.

Secondly, studies show that being well dressed can boost your confidence.

Last and not least, some elite championships have a strict dress code because they want to maintain the prestige behind their events.

If you want to look like a grandmaster, business casual or smart casual styles are probably the way to go.

Collaborations between fashion and chess

In 2005, fashion designer Alexander McQueen chose to use the game of chess to present his spring/summer 2005 collection. The collection was called “It’s Only a Game.” While the clothes were not really designed with chess in mind, the runway setting represented a chessboard and reminded people of how a chess piece moves along and off the board.

Then, in 2010, during the New York Fashion week, the Dutch chic-yet-casual clothing company G-Star Raw organized a chess game with Magnus Carlsen, the Norwegian chess genius, before their fashion show. The same year, the grandmaster modelled for their fall/winter collections along with Liv Tyler. Magnus also appeared in their 2014 Spring/Summer campaigns, making a bridge between chess and fashion.

In 2013, World Chess Hall of Fame held a world-class exhibit, “A Queen Within: Adorned Archetypes, Fashion and Chess”. The exhibition showcased the different faces of the “Queen” and involved a team of international chess players, fashion insiders and curators.

Finally, in 2017, Saint Louis Fashion Fund partnered with the World Chess hall of fame in an attempt to create an official chess uniform.

Even if it’s not (intuitively) obvious, there are some bridges between the fashion and the chess world. But I am sure The Queen’s Gambit will definitely have an impact on Chess players’ fashion.

Back in the 60s, the chess world is still a nerdy, geeky world. Chess players were not really the types to wear extravagant fashion. And as we saw earlier, there aren’t any real dress code for chess players. Yet, Beth Harmon is a true fashionista who not only stands out by her mind but also by the way she looks.

I am really amazed by Gabriele Binder’s fashion design work because each outfit is a true reflection of Beth’s state of mind and her evolution throughout the series.

In the 6th episode, Beth lacks the money to go confront her longtime rival, the Russian chess player, Vasily Borgov. Her friend and sole family Jolene then jokes about how she should have saved some money instead of buying dresses. Beth replies that was not possible.

That scene, to me, shows well how important fashion is in Beth’s life.

Fashion, for Beth, is a way to take control of her life. As an orphan child, she didn’t get to choose what outfit to wear during her childhood. When she arrives at the orphanage in Kentucky, the headmaster, Mrs. Deardoff, forces her to give up one of her few belongings: a pale green dress her mother embroidered with her name.

In place of the dress, Beth is given an outfit that’s nearly identical to every other girl in the building, stripping her of her identity.

Even when she gets adopted, she doesn’t really get to choose what to wear. When shopping for new clothes, Alma, her adopted mother, goes ahead and gets her a (pretty plain) dress without really asking for Beth’s opinion.

But as soon as she wins her first tournament, Beth goes shopping. She buys, aside from a chess game, a beautiful green checkered dress she eyed on at the department store in her previous shopping trip with her adoptive mother. It’s the beginning of her independence. It’s her taking control of her style and future.

As she wins more and more tournaments, Beth also gets more and more popular, attracting the attention of the media and the boys and girls at school. After she gets invited to a girl’s party, she finally understands that she doesn’t need to belong to a group, that she is her own kind of beautiful.

From then, her outfits got more feminine and extravagant. Her earnings are pretty good and she can afford the best designers’ brands. She is always put together and has this classy vibe that makes her a very charismatic character. Even her most casual clothes have some tiny yet elegant details that change it all.

There is also a deep connection between fashion and home for Beth.

While she didn’t get to decide what to buy when she first goes shopping with her adoptive mother, Beth seems to appreciate this family moment.

After her first victory, her adoptive mother takes Beth’s chess career in charge and sees her in a different light. As for Beth, she also uses fashion as a way to connect with her new mother. She often asks her mother’s opinion regarding the outfits she is going to wear. They go to the Beauty salon together. Fashion seems to be a way for them to bond and get closer.

For Beth’s birthday, her mother gets her a beautiful engraved (“with love from mother”) bracelet watch. And until the end, you can still see it on Beth’s wrist.

After Alma’s passing, you could also glimpse Beth incorporating a few pieces of her mother’s wardrobe into her outfits.

Green also seems like a common thread that ties her to her “home” throughout the series.

The only souvenir she has from her biological mother and is a pale green embroidered dress. And each time she is having a hard time or an important moment, she wears something green : the green dress when she loses against Borgov in Paris, a green cap in her “dark period” outfit, the green dresses at the russian competition…

It’s so interesting to see how with colors or styles, you can actually plant clues on where the story is heading.

Though you don’t actually see Beth buying them, you can glimpse that Beth got herself a pair of the black and white Oxford Shoes that all her schoolmates were wearing. It shows how much Beth wanted to find her place, to get integrated.

Green is Home but also addiction

The dress she wears in her final match against Borgov looks actually similar to the light green embroidered dress she wears in the first episode. The circle is full. She feels home and she is backed by a circle of friends and family.

Lips as red as blood

As the show progresses, Beth’s makeup becomes more and more glamorous. As she gets more confident, her lipstick gets bolder in color and redder.

Towards the end, Beth’s lipstick shadows the one her adoptive mother, Alma, used to wear. Daniel Parker, the makeup artist of the series, planned it so as to make it an ode to her second mother.

In the books, Beth has brown hair

However, in the series, Beth has red hair. It was Daniel Parker’s idea (which was then easily accepted by the producer and the main actress) to make Beth stand out even more.

A lot of Beth’s outfits recall the pattern of a chessboard. Checkered patterns are everywhere and when she doesn’t wear them, she often wears clothes with colors that often contrast to each other.

“The contrast of the check print also mirrors the nuances of the game itself — it’s decisive, it’s win or lose —which you would not have with, say, a floral print.”

Benny and Beth’s outfits were designed to make them look different from normal chess players. With his lonely cowboy look, Benny gives off a sort of rebel vibes.

While in Paris, Beth wears a very elegant dress that can remind us of Pierre Cardin’s designs.

With her afro haircut and her leather jacket, Jolene looks like a badass superhero coming to rescue Beth.

said The Queen’s Gambit costume designer, Gabriele Binder, in an interview with Vogue.

4 Fashion ideas to steal from The Queen’s Gambit

The Queen’s gambit is a great source of inspiration when it comes to fashion. Here are 4 elements you might want to incorporate in your fashion sketches.

Awesome collar and back details

Can I become a Fashion designer without a fashion degree?